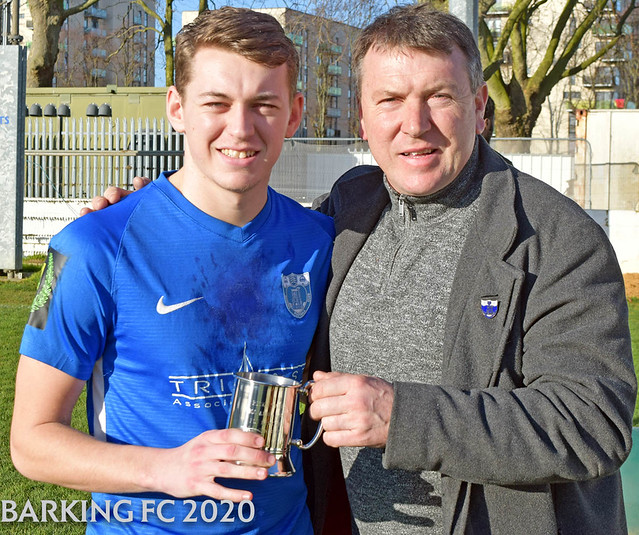 On Tuesday evening at Waltham Abbey Ricky Tarbard made his 200th appearance in our league game - prior to today's game Rob O’Brien presented a silver tankard on behalf of the club to commemorate another milestone in his Barking career across a number of years.

His first senior appearance came against FC Romania in August 2015 and he went onto make 25 appearances, while continuing to play for the Reserve team. He established himself as a first team regular in the next season as we went on to win the Essex Senior League and gain promotion to the Isthmian league. Since then Ricky has taken the step up a level in his stride, continuing to be a consistent performer and this season has doubled his career goals total with the winner against Harlow in December and the opener at Dagenham & Redbridge in January.

First Team manager Justin Gardner's opinion on Ricky is: "I would just like to send huge congratulations to Ricky on his 200th appearance, a player that in the best way I can praise is that in three years I have been managing him I can only remember two off days. He is very consistent, probably one of the first names on the team sheet and rarely misses a game. In fact, he has missed maybe two games in the three years I have been managing Barking. He is a huge credit to the club, his family and a player that has improved season on season and is just a joy to manage. I look forward to him breaking many more records at Barking and playing a huge part with us trying to climb the football pyramid. Well done to him and well done to his family who support him."

Chairman Rob O’Brien has this to say: “Ricky has been with Barking FC for nearly ten years and you would be right to automatically assume that by this time he should be making his 200th appearance. However, as Ricky is only 22 years of age and been ever present since his first selection when he was just 18 is testament to his ability and development over his formative years as a youngster at the club. Ricky has already compiled a number of key milestones in his flourishing career; U19 Division National Champions and Cup finalist, National Futsal Finalist, Essex Senior Champion and subsequent promotion to the Isthmian League. He is very well supported by his family and friends who I’m sure just like the club would want to see Ricky push up the leagues and obviously take the club with him. He has been a leading light to all of our club’s young players and I hope for many years to come. Well done Ricky.”

Congratulations to Ricky on reaching his double century and the club would like to thank him for his loyalty and wish him well for the next century of appearances.

Barking Football Club established 1880. Who play at Mayesbrook Park and formerly at the Vicarage Field.