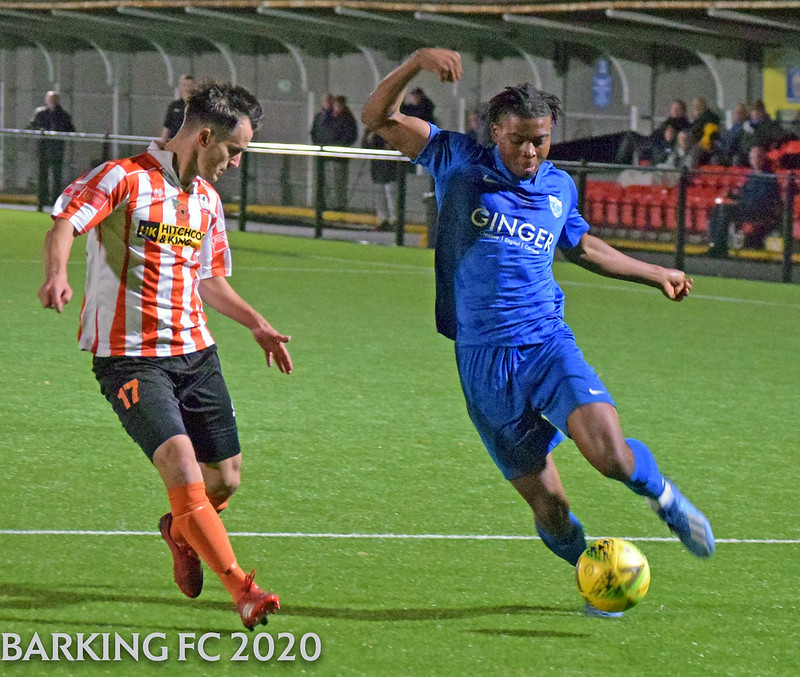 BARKING LOCKDOWN ON A HIGH NOTE

The Blues made it three league wins and clean sheets to match on the bounce by beating a stubborn Ashford Town side in a match not unlike the recent win at Westfield that was only ever going to be settled by a single goal. The winner came with just one minute of normal time remaining courtesy of Dumebi GB-Dumaka, scoring his third of the season and 50th senior goal of this Barking career.  His first was back in January 2012 netting the fifth goal in a 6-3 win over Sporting Bengal at Mile End.

For the third game running we kept the same starting eleven and new signing Kane Munday formerly of AFC Sudbury was an unused sub.

The game got off to a slow start with Isaac Westendorf having the first shot but it was wide of the goal and on ten Westendorf turns provider when his header finds Junior Luke but his attempted lob trying to catch out visiting keeper Paul McCarthy flies over the bar.  Four minutes later a spell of Barking pressure ends with a Luke cross met by Westendorf who can only drag his effort just the wrong side of the post. The chances continued for the home side on 21 Michael Tweed breaks forward and his far post cross is met by Sam Owusu whose header was wide. In the last third of the half Barking really should have been ahead: another Luke cross causes danger and Albie Sheehan-Cozens unleashes an on target shot which McCarthy acrobatically turns over. A Ricky Tarbard through pass is converged on by both Owusu and Tweed, but Tweed’s shot is saved by McCarthy at close range at the expense of a corner. 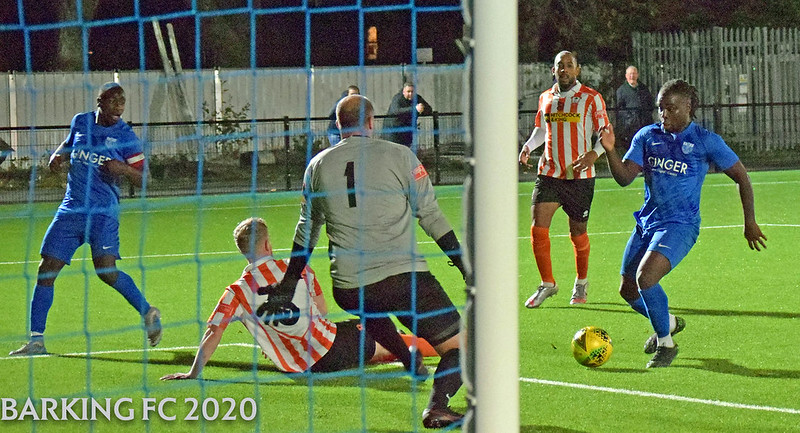 Finally, on the stroke of half time another spell of pressure culminates with Owusu and Westendorf uniting to set up Julien Anau whose shot is again on target and again turned over by McCarthy who had been the busier keeper up until that point.

After the restart the pattern continued with the home side applying pressure but with no real end result. Five minutes in and Luke again is the instigator as he finds Westendorf but the Barking striker is unable to find a colleague. After 55 Sheehan-Cozens plays an excellent ball inside and sets Louis Dillon free, his pass inside finds Anau but he is again denied by McCarthy who saves his shot. 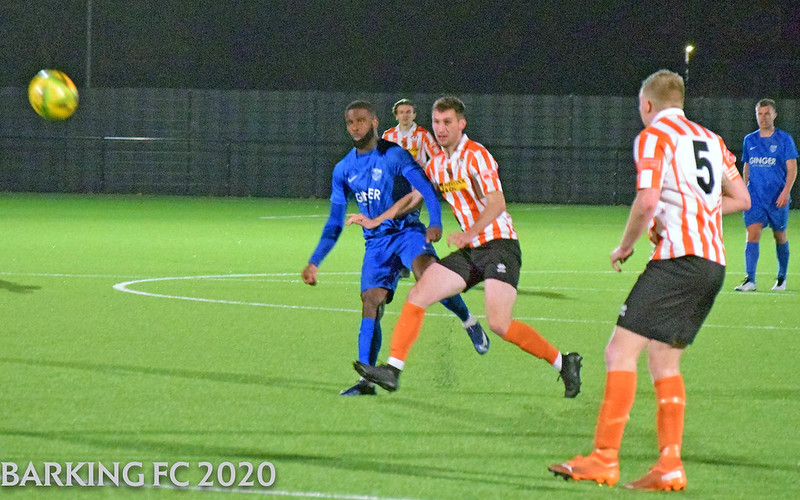 Just a minute later Dillon delivers a corner which results in a large scramble, Jack Hayes is heavily involved and Westendorf sees his shot blocked near the line. For while afterwards it seemed that Barking may have shot their bolt as Ashford seemed to enjoy the lion’s share of possession but in keeping with the pattern of the game, they really only fashioned one chance from a corner that was headed back across to a waiting attacker who could not make the telling contact and the ball was cleared. As time began to run out nothing was really happening at either end apart from a free kick from a Dan Flemming foul and an Ashford corner, where on both occasions Manny Agboola displayed excellent handling skills to come and safely collect the ball. Just as a scoreless draw looked the likely outcome with one minute remaining the decisive strike was made by Barking, a Dillon long throw is flicked on by Anau and Dumebi GB-Dumaka is on hand to fire home and give us the lead. 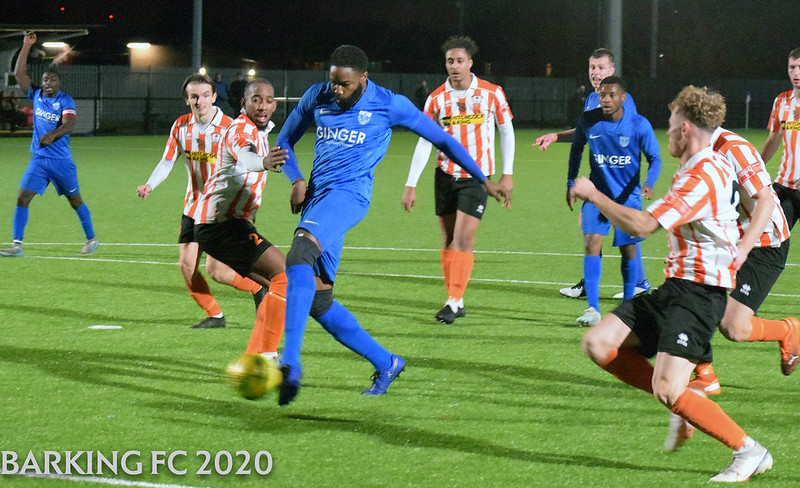 However, that is not the end of things: two minutes later in added time, Manny Agboola goes full length to make a save and keep hold of the ball.  We should have been two goals to the good when sub and birthday boy Junior Dadson latches onto a pass and unleashes a thunderbolt which smacks the bar, the ball skims McCarthy and the pace of the rebound is too much for the incoming GB-Dumaka. The last word belongs with Agboola as makes another full length save from what was virtually the last kick of the game.

The win moves us up to twelfth and we go into the lockdown period on a four game unbeaten run. Our next scheduled game is on December 5th when we are due to travel to Bracknell Town, it is possible that the FA Trophy first round tie away to either Merstham or Carshalton Athletic may come first. In the meantime, we hope everyone stays safe and hopefully we will all meet up again soon.

Please note that the opinions expressed in this report are those of the author and do not necessarily represent the views of, nor should be attributed to Barking Football Club. 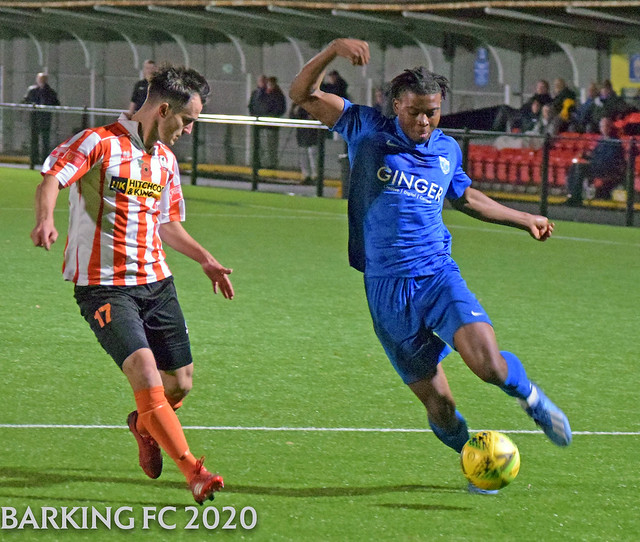 Barking Football Club established 1880. Who play at Mayesbrook Park and formerly at the Vicarage Field.